Hope everyone enjoyed their Memorial Day weekend! We were due for a nice weekend, and we sure got it.

Reports of sea bass popping up more and more coming in from the surf. Fishermen consistently hitting their limits all week.

Blues have slowed down a little, with reports dropping off but still scattered.

Some ling and a couple flounder came in with the blues as well.

It was an okay week for tuna, but we’re still early in the season. Most bluesfin – haven’t heard of any more yellowfin, but that’s not to say they’re not out there.

A couple of thresher sharks brought in the past couple weeks. Heard there were a few mako as well.

By now, everyone should know about our annual Kids Catch All youth fishing tournament on June 21-23 – we still have sponsorships opportunities available, so if you are interested in

Hope everyone was able to get out and enjoy the summer tease this week. It’s looking nice tomorrow morning, but then it’s a full two weeks of rain.

We’re done with tog now, just about. People are still fishing for them, but it’s few and far between at this point.

The Inlet was kicking this week, with some anglers reporting limits of bluefish. Sounds pretty good to me! The anglers with limits reported they were using minnows.

The beaches are coming up with blues, short rock (few keepers), black drum, and blowfish.

If you want to keep up with the fishing community both locally or all over the nation, download the new social fishing app Great Anglers from your app store, for iPhone and Android. The app is free, and it allows you to see what’s being caught and where, either near you or anywhere, which I love because you can see all the gorgeous tropical fish being caught down in the Gulf. The app was co-created by the owner of Hook ’em& Cook ’em, and you can follow them at hook-em&cook-em on Great Anglers.

Hammerheads is OPEN 7 days a week so come snag a snack, a meal, a drink, or all 3. They will be CLOSED next Friday May 10.

It might not be sunny, but at least it’s warm! Looking forward to this weather break. Hopefully it sticks.

Tautog are down for the count. Thank goodness coming in right behind them – we have the first flounder reports of the year that came out of the Indian River Bay on Sunday – one keeper and two shorts. Not much more information on those.

More good news, after a couple weeks of shorties, the first keeper (33 inch) striper was reported to come out on a bucktail on the north end of 3R’s in Delaware Seashore State Park. Anglers have been pulling shorts up steadily from the rocks at the IR Inlet and from the beaches as well.

Don’t forget – June is coming up quickly and so is our Kids Catch All Tournament! No experience necessary – open to youth anglers age 3-18, and every entrant receives a prize! Two nights of dinner, raffles, and family fun! Check out kidscatchall.com or call us at 302-227-3071 to find out more!

Although it might be a bit windy today, it’s still been an amazing day at Indian River Marina. Beautiful weather looks to be on the forecast tomorrow so be sure to come on down to the marina and take part in the amazing fishing! Inshore reports Flounder, Croaker and Sea Bass still hold strong as many of them are still getting hooked. Offshore scattered Tuna, both Bigeye and Yellowfin are being caught, Wahoo and Gaffer Mahi also are landed. Marlin releases continue to be up also.

Be sure to stop by and enjoy this amazing weekend. Grab yourself a cool drink and listen to great music at Hammerheads as the boats come in. Stop by on Sept 12 from 9 to 3 to see what all our slip holders are selling in our first Fisherman’s Tailgate.

Now lets get to all the amazing photos!

James Walker of Ocean View, DE, caught this keeper flounder that weighed 2lbs while fishing on the Judy V. with Capt. Eddie Wheedleton. They were fishing at the Old Grounds using cut bait on top and bottom rigs. 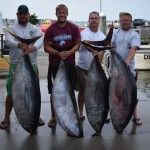 Johnny Coffiey and Mike Baumgartner of Hook ’em & Cook ’em and Capt. Dave Collins and Capt. Brian Joseph of the Capt. Ike II took a fun fishing trip out to the Baltimore to track down some big eye tuna. They left the dock at 3pm headed to the Baltimore Canyon caught 4 out of 7 big eyes and were back to the dock by midnight. They weighed 150lbs, 148lbs, 149lbs and 132lbs and were caught trolling ballyhoo. 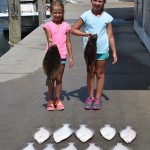 Capt. George Merrick took his daughters Lily and Sophia fishing out to the Old Ground and they came back with their limit of Flounder. Capt. George reported that they caught all the fish using cut bait and squid.

Boy Scout Troop 534 from Harrington, DE took a split charter with Capt. Rodney Jones of Fish Whisperer Charters and Capt. Rodney Meyers of Last $.  The troop was attempting to earn their merit badge for catching, cleaning and preparing their fish.

Another great week here at Indian River Marina! Inshore reports Sea Bass, Croaker and many people are still catching their limit of Flounder. Offshore reports lots of Gaffer Mahi, and nice sized Blue Line Tilefish. Tuna are scattered but there have been some nice sized Big Eyes landed. There have been many White and Blue Marlin releases as well!

With summer coming to an end be sure to take advantage of all the great fishing while you can. This weekend looks to be just as great as this past week, so call the office at 302-227-3071 and ask for Carolyn to book yourself a charter today!

Now for photos of all the great catches! 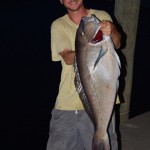 Andy Orr of Drumore, PA caught this 22.2lb and 36 inch blue line tile while fishing out at the Baltimore Canyon with squid. This is pending for yet another new Delaware record for the blue line tile category.

Karen, Michael and Alex Avery along with Max and Ben Napolitano caught these keeper flounder while out at the Old Grounds fishing with squid and minnows. The largest weighed in at 4 lbs. 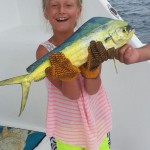 Kiira Akers of Morcroft, WY caught this 8 lb mahi while fishing on the “Sailor Ann” in Baltimore Canyon while casting chunks of ballyhoo on a spinner. 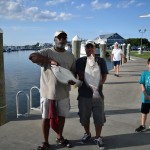 While fishing on the head boat Judy V. with Capt. Eddie Wheedleton Mike Lewis of Phila, PA and Phil Binaso of Long Island, NY brought home some nice sized flounder while fishing around B-Buoy using cut bait. The largest weighed in at 4.9lbs and measured 24 inches.

The crew from the Fish Whistle set out on an overnight trip to the Washington and came back with thees big eye tuna that weighed in at 177 and 145. They also brought up a 39.2lb sword fish and had 2 white releases and 1 blue release. Pictured are Trent and Bill McMahon, Johnny and Owen Horning.

George Fisher of Hook’em & Cook’em Outfitters caught this 4.6 lbs 24 inch flounder while fishing with Gulp baits out at the Old Grounds. 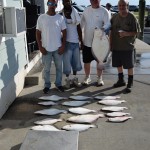 Photos courtesy of Hook’em and Cook’em