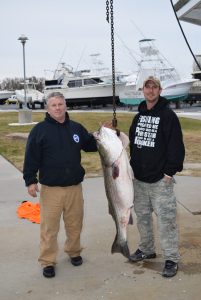 We have so many things to be thankful for here on the east coast.  From our beautiful beaches to our amazing fishing, we have it all.  Please be safe this holiday season and give us a call to book one last charter trip for the season.  We still have charter boats in the water and they are ready to fish.  Give us a call at 302-227-3071 and we will get you hooked up!

We are hearing numerous reports of small blues, rockfish and tog around the inlet and inshore. We will let you know when we hear about the rockfish moving down into our area.  There is still time to book a charter trip this year.  Give us a call at 302-227-3071 to get more information.

Also, please note that the marina will be closed for the Thanksgiving Holiday on November 24 & 25.   In addition, December 18th will be the last day our boatyard is open on the weekends and will be the last Sunday the Marina Office will be open on Sundays.

We are having some great deals at our Ship Store as we prepare to close up for the season.  Stop in for 40% off Mojo items, discounted IRM logo items and 25% off regular priced items through out the store.

Active dredging taking place in Indian River Marina Mon-Fri from 7am-3pm. Please use caution when entering and exiting the marina. There will be temporary closures of the public boat ramp.

The fishing inshore has remained steady with Taug, Rockfish, blues and flounder.  The offshore is still producing yellowfin, Mahi, Wahoo and even reports of White Marlin out in 67 degree water.

Til next time, Good times and tight lines!!!

Caution! Dredging in process at Indian River Marina.  During the hours of 7am-3pm, there is an dredge crew working close to the entrance to the marina.  Please be aware of temporary closing.

As for the fishing, several boats went out yesterday and landed some yellowfins.  Hopefully the hurricane out in the Atlantic will push the fish in closer to shore.  We’ll see what happens here in the next day or two.

Til next time, Tight Lines and Good Times!

Still blowing pretty good. Very few boats heading out. With the pending storm Matthew, the conditions will probably not get much better. We will have more on the fishing when we get it.

IRM dredging – the equipment is all in place, but we are securing it in the event this storm comes our way. If you are using the ramp at Indian River Marina, use caution around the dredge equipment and be sure to pass between the two white buoys that mark the dredge pipe.

Dredging update:  Due to inclement weather, the Public Boat Ramp Closure will take place on Monday, October 3, 2016.  Contact the Marina Office at 302-227-3071 for further updates.

Indian River Marina – PUBLIC BOAT RAMP CLOSED TODAY, Wednesday, September 28, 2016, due to dredging operations.  We expect the ramp to open back up by the end of the day today.

As for fishing, we are getting numerous reports of Tuna, Wahoo and Mahi being caught out at the Wilmington and Baltimore.  The wind is blowing, so it will be a rough ride if youdo decide to head out.  Good luck out there!

On Tuesday, September 27, 2016, from 8am-12pm, the dredge crew will be installing the pipe that will cross from Burton’s Island to the fairway between A and B docks. Since the pipe will be floating during this process, access to the ocean/bay will be closed for B, C, D and E docks.  Also, Drystack customers will not have ocean/bay access as well.  The boat ramp will also be closed during this time period.  Once the pipe is connected, it will be sank to the bottom and boat traffic can resume as normal, with intermittent closings which are expected during the dredging process.  A vessel from the dredge crew will be positioned by the pipe crossing during dredging to offer assistance to boaters transiting the area.