Happy Holidays to those of you that celebrated this week or this month!

Reports say that good-sized sea bass are hitting the decks in the Washington Canyon. There’s also reports of plenty of tog at Site 11.

Don’t forget to put the 5th Annual Kids Catch-All Tournament on your new 2019 calendar on June 21-23! This tournament is held right here at IRM, has 12 total divisions, and a portion of the proceeds benefits the Lyme Disease Association of Delmarva!

IRM is wishing you a happy and safe New Year’s Eve and a restful New Year’s Day.

Oh! And don’t forget to come say hey at our booth in the Ocean City Boat Show on February 15-17!

Alright folks, it’s officially cold outside! IRM is completely winterized and the slips are emptying as vessels move to their winter homes. The boat ramp lot was full yesterday with people out taking advantage of the low winds.

Reports say that keeper rockfish are thick just north of the Indian River Inlet. After a week of shorts, this brought relief to many of our dedicated fishermen.

Fishing is red HOT!!!   We had a full Headboat this morning and many of our Charter and private boats headed out as well.  We have seen alot of fish hit the docks this week.  Yellowfin Tuna, Big Eye Tuna and  Swordfish.  We do have some Charters running all winter so if you want to get hooked on your own fishing trip give us a call at 301-227-3071.

Here are some pics from this past week of fishing. 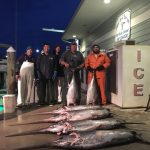 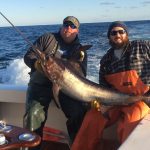 We hope everyone is getting ready for the big Turkey Day!!!  Till next time Tight Lines & Good Times 🙂

It has been a beautiful couple of weeks down here at the Indian River Inlet! The sun is shining, the cool breeze is blowing, and it’s really beginning to feel like fall. The tourist crowds have cleared, so there’s plenty of fish for the locals to nab!

Inshore fishing has been steady. Reports coming in with lots of blue fish and flounder on the lines. Our onsite bait & tackle shop, Hook ’em & Cook ’em, has had people coming in with scattered triggerfish, a few Spanish mackerel, and tog.

Offshore fishing reports have been awesome. Reports of people hitting their limit (or getting close) of mahi every day for the past couple weeks. There have also been reports of good white marlin fishing, some people even saying they’ve caught more in the past couple weeks than they did all summer combined. There’s also been some scattered blackfin and some yellowfin here and there.

Well, folks, the weather is gorgeous, but it won’t last much longer. Make sure to get out there while the crowds are low and the fishing is still hot! Call Carolyn at 302-227-3071 so we can hook you up with a charter trip!

It has been a long couple weeks down here at the marina. After a hefty nor’easter and a light brush with Hurricane Florence, we are just starting to see our fishermen’s faces down on the docks again. Luckily we made it through the storms with no notable storm damage, but our thoughts are with those in North Carolina.

Due to the weather, there has been little to no interest in fishing for the past couple weeks, but current offshore sources say the waters are loaded with mahi, with a few white marlin and wahoo hitting the docks as well. Spot, croaker, flounder, and blues are getting hooked from Cape Henlopen on down to the Inlet, with the CHSP fishing pier being the only consistent location.

Weather is looking beautiful for tomorrow, so come on down to IRM and spend the final day of the (official) summer on a boat! Call Carolyn at 302-227-3071 for more information and for reservations.

The Labor Day bustle is out the door down here at IRM. While we haven’t had many people around, those that do come in are bringing back some great hauls. Looks like flounder fishing is really stepping up with a couple monsters hitting the decks this week.

DON’T FORGET – Come down for our Fisherman’s Flea Market this Saturday from 9:00 am – 2:00 pm to buy gently-used, professional fishing equipment and whatever else our slipholders are selling!

Posing with Toby Miller’s fish is Capt. Don Gillis, both of Dover, DE. This fish was caught out by Toby while at Site 11.  This 9.5lb and 28 inch flounder using a Spro bucktail with a 6″ Gulp grub and squid strip.

Brugh Moore of Rehoboth Beach, DE caught his first flounder on Tuesday and boy what a whopper it was.  This 9lb and 28 inch flounder was the largest flounder we have seen come in from the Indian River Inlet this summer.  It was caught using a chunk of mullet on a circle hook while fishing in front of the Coast Guard Station.  He will be spoiled forever now!

Fishing out at the Rock Pile was very productive for the crew of the Even Keeleigh.  They were deep dropping squid and cut bait to bring back this batch of large black sea bass and some very nice blue line tile fish.

Cousins, Alexis and Jeb Zolper, both from Rehoboth Beach, DE fished out at the Lightship with chunks of mullet to bring in this catch of mahi. The largest fish weighed 3lbs and was caught by Alexis.

Enjoy the waning summer offshore on one of our charter boats! Call Carolyn at 302-227-3071 to squeeze in that fishing trip before the cold winds take over.

We made it, folks – Labor Day is officially here! And what a gorgeous day for fishing to top it off.

Fish have been hitting the docks despite the intermittent storms all weekend. Inlet fishing has been poor, but fishermen are reporting that there is plenty to catch out in deeper water at the Del-Jersey-Land Reef and the 30-Mile Wreck.

Now that the summer crowds are clearing up, it’s a great time to head out on the water on one of our charters! Call Carolyn at 302-227-3071 to get hooked up with an offshore trip.

Have a wonderful Labor Day, and until next time, tight lines & good times!

While a bit too gusty to head out very far this week, the weather was beautiful in our corner of the eastern shore. Despite the wind, fish were still hitting the docks, with tuna looking like it’s going to pick back up in the next couple weeks.

Good luck to any and all of our local Indian River boats fishing the MidAtlantic tournament this week. Show those boys across the bay a reel good time! 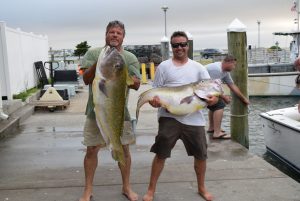 These golden tile fish were caught by Robby Marin and Adam Bauer of Edgemere, MD while fishing on the “Dark Star”  They caught these 45.6lb and 38lb golden tile fish while deep dropping at the Poor Man’s Canyon on the 100 fathom line using whole squid.

Kevin Elden of Baltimore, MD on the Reel Ledo.  29.2 lbs. Caught on a naked ballyhoo at the Baltimore Canyon. 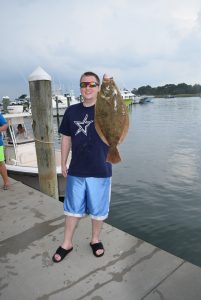 Kyle Neibich of Boonsboro, MD, caught this 3.7lb and 22 inch flounder while fishing on the north jetty of the Indian River Inlet using minnow on a top and bottom rig. 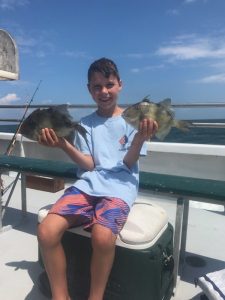 These photos are all from the Capt. Bob II outing on Wednesday 8/22. Capt. Bob II and Judy V are the only two headboats at IRM, and both are operated by the wonderful folks at Hook ’em & Cook ’em.

There’s still a little bit of time left to squeeze in that fishing trip before the summer fun comes to an end. Cool off next week by heading offshore on one of our charter boats. Just call Carolyn at 302-227-3071! 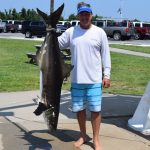 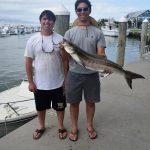 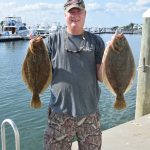 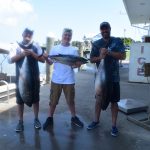 It’s been an equally busy and beautiful week for the White Marlin Open so far! We’re rooting for our Indian River teams Fin-nominal, currently holding first place for dolphin (50 lbs), and Canyon Hunter, currently in second for the wahoo (55 lbs). Reel in those trophies, guys!

Fish have been hitting the docks like crazy this week. Check it out!

This 54lb blue fin tuna was caught on the Work Release while chunking with butterfish out at Massey’s Canyon.  Lucky angler Addison Browne of Dagsboro, DE reeled it in with the help of both Quinn Finnegan of Glenn Mills, PA and Clay Harrison of Boyertown, PA. 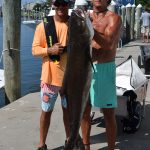 Pictured with his father Nick who caught two cobia last week, Cross Ferrara, of Middletown, DE caught this 59.5lb and 48 1/2 inch cobia while fishing from his jet ski out a 1/2 a mile in front of Bethany Beach, DE using eel.

Tom Traxler of State College, PA caught this 7.8lb King Mackerel while fishing out on the Razorback out of Indian River Marina with Capt. Roger Quigley.  They were trolling Clarkspoons along the beach in front of Fenwick Island, DE. 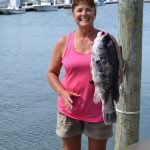 Denise Eddinger of Longneck, DE caught this 7.2lb and 23 1/2 inch long tautog while fishing out at the Del-Jersey Land Reef on the “Paul B.

Sands” with Capt. Randy Eddinger.  Denise reported that they also had 70lbs of large and medium black sea bass along with this citation fish that was caught using squid.

Good luck to everyone fishing today and tomorrow, especially our Indian River Marina boys! Make sure you toss your lines out before the summer ends! Let one of our charters take you out for the day – call Carolyn at 302-227-3071.