The fishing is hot…just like the temps outside!  Check out these reports and pics: 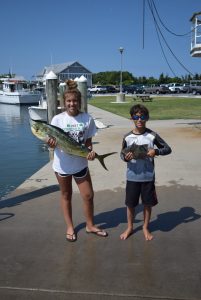 Brynn Harrison and her brother Clay, of Boyertown, PA fished out at B-buoy and caught this nice trigger fish using cut bait and then traveled a little farther east to hook up a 10lb mahi on a feathered jet lure. Good job guys!!! 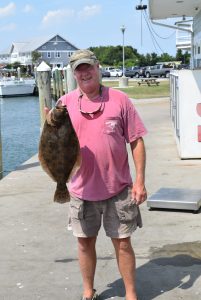 Burt Campbell of Dagsboro, DE caught this nice 5.9lb and 23 7/5 inch flounder while drifting on the south side of the Indian River Inlet. He was using a 1/2oz jig with a white Gulp bait. 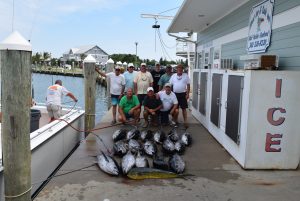 This trip on the Capt. Ike II was successful for Mike Lawson, Tom Healy, Jeff Ratlif and Connor Devine all from Fairfax, VA. They were chunking out at the Hot Dog and landed these 6 nice yellow fin tuna weighing in at 45-55lbs.  Capt. Dave Collins and Capt. Brian Joseph put them on the meat even with some nasty sea conditions that day. 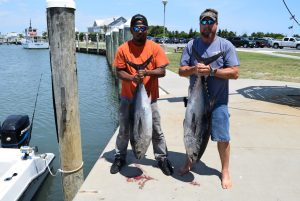 Nino Mallori and Tom Handy of Dagsboro, DE caught these nice tuna while the troll was still good out at Massey’s Canyon on the “Booby Trap”.  They used blue and white skirts on rigged ballyhoo. These fished weighed 45lbs and 50lbs.

The heat is on!!!!  Mid 90s or higher for the next several days.  Come out this weekend to the 9th annual seafood and arts festival at Indian River Marina.  There will be over 60 craft vendors and many seafood vendors including our own Hookem & Cookem as well as Hammerheads Dockside serving up some great seafood items.  The festival is this Saturday from 9am to 5pm.

Check out these pics from the Judy V. head boat run out of Indian River Marina: 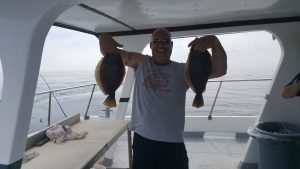 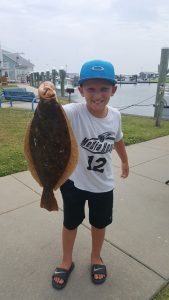 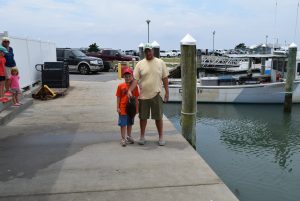 The weather is cooling off for the weekend…only going to be in the high 80s!!!!!  the fishing is still great.   Check out the pics below of fish that have hit our docks this week.

Good luck to all of the participants in the Ocean City Tuna Tournament, especially the boats fishing out of Indian River Marina! 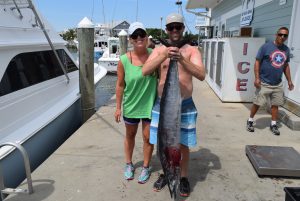 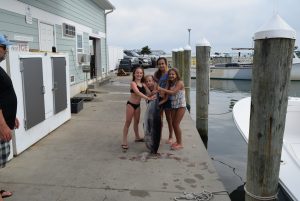 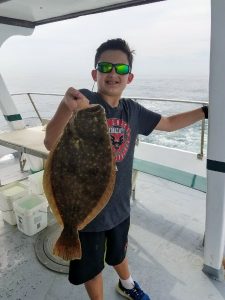 The heat is on and so is the fishing.  We are seeing all species at the docks here at Indian River Marina.  Stop over to Hookem & Cookem to see these fish hit the docks.  Try and stay cool and get out there and fish! 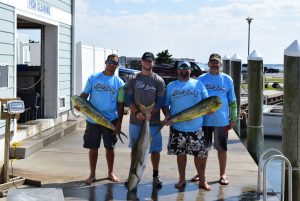 The Peter Bradley from the “Still Lucky” fished out at the Reliance and caught this 37.6lb and 45 inch cobia by pitching out ballyhoo to it.

They also hooked up some mahi. Also pictured are Steve Danner, Michael Hawkins and Brandon Hawkins all from Mechanicsburg, PA. 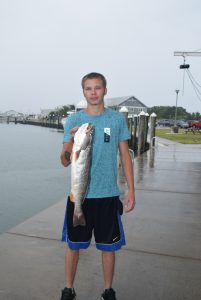 This 5.4lb sea trout or weakfish, was caught by Joey Clair of Middletown, PA on the north side of the Indian River Inlet while fishing with sand fleas. 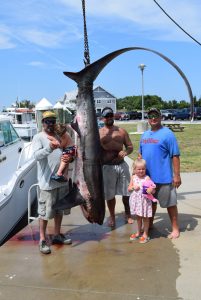 The wind is still kicking down here at IRM.  For those that are braving the wind, they are catching some fish!  Check out these reports and pics:

The Capt. Ike II fished a day trip to the Hot Dog with Dan Miller of Bethany Beach, DE, Dave Harrington, Jim McGrath Mark Krynitsky and Mike Esham all of Ocean View, DE and caught these nice yellowfin tuna weighing up to 50lbs with ballyhoo on spreader bars. 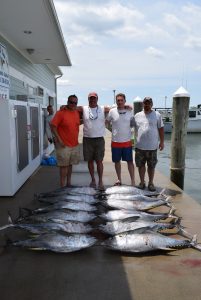 Tim Roberts of Hockessin, DE, Jim Sensenig of Quarryville, PA, Tony Burr of Newark, DE and Dave Woods of Northeast, MD caught all of these tuna while fishing with pearl Carlson Lures on a spreader bar out north of the Wilmington Canyon. 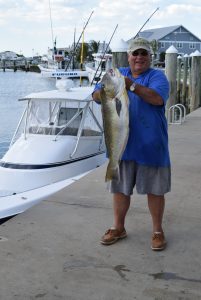 Jeff Waxman of Bethany Beach, DE fished with the crew on the Valkyrie out at the Baltimore trying for tuna, but came back with this beautiful 24lb golden tile fish that was caught when deep dropping whole squid. 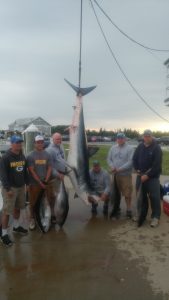 Capt Ike II had an overnight trip to the Hot Dog and caught this 396lb mako using mackeral fillet and chum. Then they also caught 4 nice size yellow fin that weighed 45-50lbs using ballyhoo on the troll. Pictured are Austin, Matt, Brian, Keith and Mike Coyle and Mike Little all from Carlisle, PA.