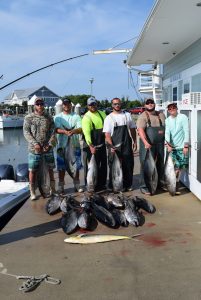 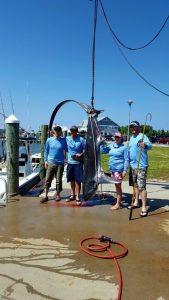 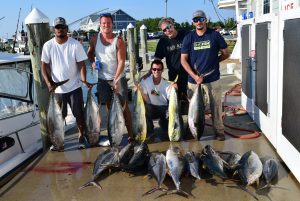 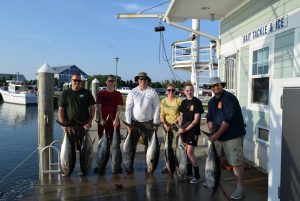 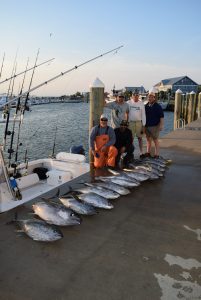 Its getting close to the 2nd Annual Kid’s Catch All Tournament on June 24-26. Fun for the entire family and no angler goes home empty handed.

Memorial Day weekend is only a few days away and  with this warm weather, the fishing is getting better each day. The Charters and the Headboats are going out each day now, and they are catching landing some great catching. Inshore Rockfish and Seabass are being landed as well as scattered Flounder. Offshore lots of sharks are being caught and some Yellowfin Tuna are being landed out at Washington Canyon. Call 302-227-3071 to book your charter now! 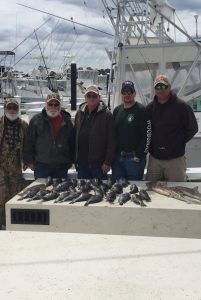 On May 23rd the Jason McNatt group from Smyrna. Boated 28 bass , a flounder and a few dog sharks at site 11 on Clam And  fleas….Fish Whisperer Charters. #wreckaholic 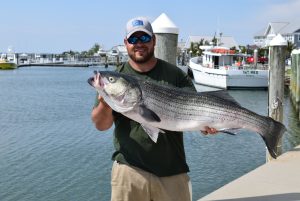 Jimmy Coffiey of Wilmington, DE, caught this 46″ 30.6lb rock fish when he was fishing the incoming tide in the Indian River Inlet. Jimmy caught this fish using a Red Head Sea Trout Tsunami swim bait fishing with his cousin Capt. Andrew Coffiey on the “Go Big”. 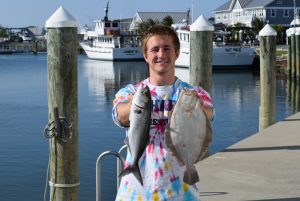 Mike Lewis of Hook ’em & Cook ’em caught this 16″ flounder and 16″ blue fish while fishing in the VFW Slough in the Indian River Bay.  He was using a jig head with a white gulp. 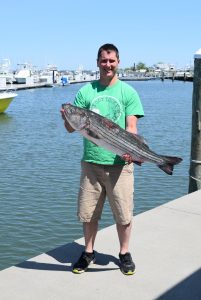 Alex Price of Baltimore, MD, caught this 37″ 17lb rock rish when fishing with a black Bomber on the North side of the jetty in Indian River Inlet. 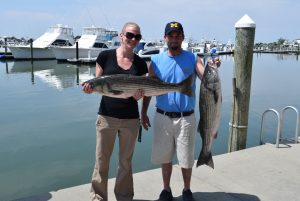 Tara Wojciechowski and John Lindsay of Dagsboro, DE caught these nice striper when they visited Ocean City, MD and fished at 137st. Tara caught hers using a Bomber and was the bigger of the two weighing in at 19.2lbs and measured 37 1/2″ while John caught his using an SP Minnow from Daiwa and it weighed 16lbs and measured 36″.

Til Next Tight Lines and Good Times!

The rain has finally stopped….for now. And the fish are starting to arrive. Offshore there are many Blue and Mako Sharks being landed. As well as Yellowfin Tuna are being caught out in Washington Canyon. Inshore Rockfish are being caught as well as scattered Flounder.

With the fish coming in and the weather getting nicer, make sure to book your charter today. Call 302-227-3071 and ask for Carolyn and she will help set you up with one of the great charter boats we have here at the marina! Or stop on by and hop on one of the head boats run through Hook’em & Cook’em. Lets get to some of the great photos from charter boats! 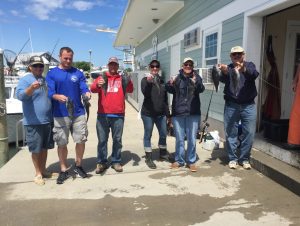 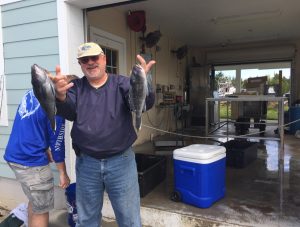 Coast Guard out of Lewes De put seabass in the box on Thursday the 19th. They fished with Fish Whisperer Charters out of Indian river marina. #wreckaholic 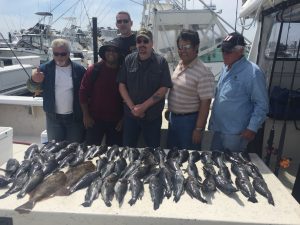 The Crouch gang from Milford Delaware Took a trip on Friday the 20th boating 60 Seabass and two flounder over 22 inches with Fish Whisperer Charters out of Indian River Marina. 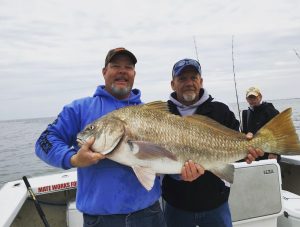 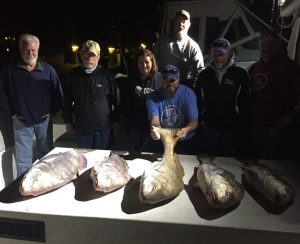 Monday, May 16 the Henry busby Grupo put five black drum in the box. They were with Fish Whisperer Charters out of Indian River Marina. #wreckaholic

Wow finally a great week for fishing and weather!!!   Here are some pics for the week.   The headboats are having great trips and catching lots of fish.  The charters are landing awesome catches and booking fast.  Inshore or Offshore you can’t go wrong this time of year.  Plenty of sharks and some nice Yellowfins caught in the Washington this week.  Please give us a call and book your fishing trip soon dates are filling fast.  302-227-3071 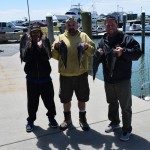 The Miss Ene III with Capt. Eddie Wagner did it again with a limit of black sea bass for Joe Muller of Garnet Valley, PA, Willie Toy of Boothwyn, PA and Paul Solum of Chichester, PA. They were fishing Site 10 with sand fleas and squid. 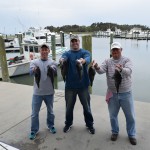 A limit of black sea bass was caught by John Breznak of Ellicott City, MD, Seth Murphy of Severn, MD and Lenny Breznak of Millsboro, DE while fishing on the Miss Ene III with Capt. Eddie Wagner. They were fishing out at Site 11 using squid and sand fleas. 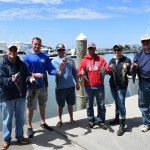 Dont forget about the Kid’s Catch all Tournament June 24-26.  Fun for the entire family.

The rain finally stopped and the sun came out…for now at least! But we will take any sun we can get, and once the weather  turned and the fishing is picking up. Rockfish, which finally arrived, and Bluefish are also being caught throughout the inlet. Inshore Tog seems to be the main catch, with many boats catching their limit. Offshore a couple of Mako have been spotted and lots of Blue Sharks have been caught.

Here are some great photos of some catches this week! 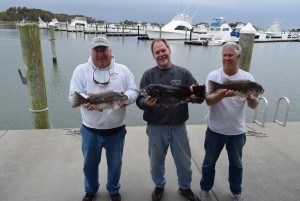 Randy Eddinger of Harbeson, DE, Mike Eddinger of Millsboro, DE and Charlie Hunter of Earleville, MD caught these nice keeper tog out at Site 11 using green crabs.  The largest one weighed in at 7.5lbs.

They also reported that were seeing nice large sea bass that of course will not be there when the season opens. 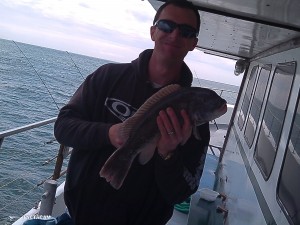 Patrick Dugan of Crofton, MD, caught this tog while fishing on the Judy V. with Capt. Christopher Adams at Site 10 using green crabs. 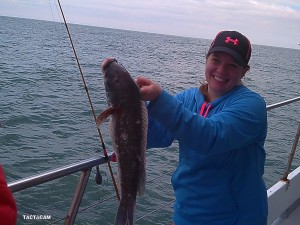 Mandy Crowley of Laurel, MD caught this tog while fishing on the full day trip on the Judy V. with Capt. Christopher Adams at Site 10 with green crabs. 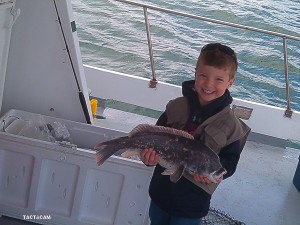 Til next time Tight Lines and Good Times!!

All photos courtesy of Hook’em & Cook’em.

We finally have the first photos of the season. With all the rain and wind, there have been some fish landed during the breaks in weather. We hope this rain will finally move on and let the season start.

Hopefully the sun will come out this weekend and, when it does, treat Mom to Hammerheads Dockside for a cool beverage, great atmosphere and a great view.

Let’s get to the photos: 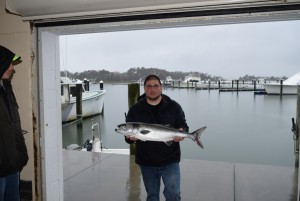 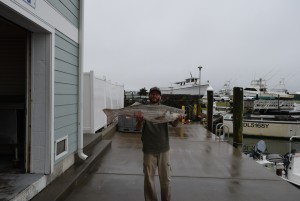 Andrew Rase of Newark, DE, caught this 19.4 lb rock fish while fishing in Ocean City on the beach.  He was using fresh bunker. 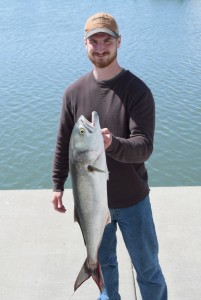 This 10.8lb blue fish was caught at 3 R’s beach on mullet by Mark Hynson of Newark, DE. 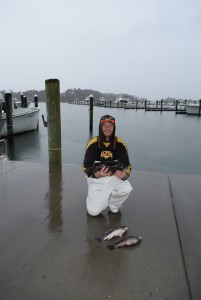 Brent Jones of Milford, DE caught these 3 tog while fishing on the Wreckaholic with his father, Capt. Rodney Jones. They were at Site 10 using green crabs and sand fleas.

Til Next time Tight Lines and Good Times!!

Photos courtesy of Hook’em and Cook’em Bait and Tackle.