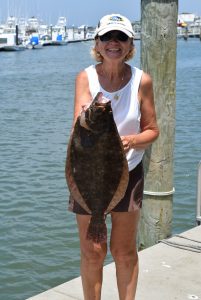 Annie Fredrickson of Rehoboth Beach, DE caught this 6lb and 25″ flounder while fishing out at Site 10 using squid and minnows. 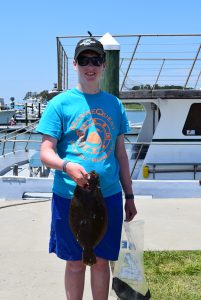 Joe Recker of Chicago, IL caught this 20″ flounder while on the Judy V. with Capt. Eddie Wheedleton out at the Old Grounds.  They were using cut bait on a top and bottom rig. 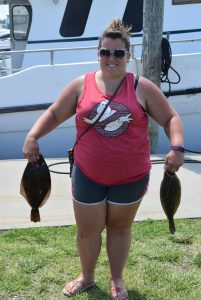 While on the Capt. Bob II with Capt. Roger Meekins Stephanie Stuble of State College, PA caught these keeper 16″ and 17″ flounder.  These were caught out at A-Buoy using cut bait on a top and bottom rig. 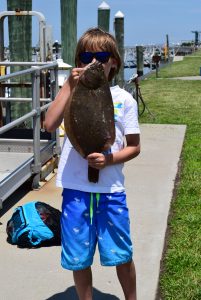 9 year old Casey Bridges of Balitomre, MD, caught the fish pool winner on the Judy V.’s morning trip with Capt. Eddie Wheedleton. This fish 22″ flounder was caught out at the Old Grounds using cut bait on a top and bottom rig. 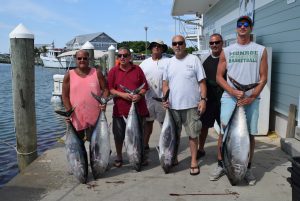 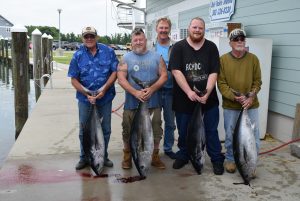 Steve Kissling of Burnville, PA, Mark Barr of Leesport, PA, Jeff Kissling of York, PA, Travis Stolz of Robesonia, PA and Lee Filbert of Mohrsville, PA took a trip with Capt. Ike II out to the Poor Man’s Canyon and had a good day of tuna fishing.  They caught four blue fin tuna while trolling ballyhoo and the largest 55.5lbs. 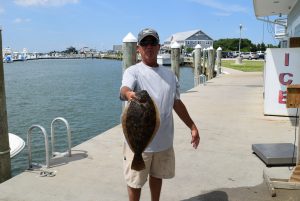 Keeping things a secret, Tony Rydzewski of Indian River, DE, caught this 3lb and 20″ flounder fishing in the “Ocean” using a silver teaser on minnow and squid. 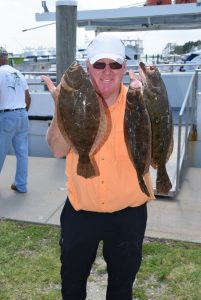 Dutch “Doormat” Workman from Salisbury, MD was one short of his limit of flounder on Thursday.  He fished the Capt. Bob II with Capt. Roger Meekins at A-Buoy using cut bait and a bucktail. Dutch’s biggest fish weighed 3lbs and measured 20″ inches 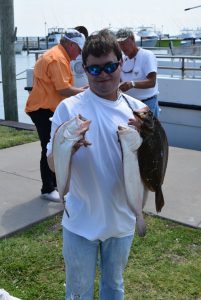 Tyler Long of Allentown, PA, was one short of a limit on the Lazy Man’s trip on the Capt. Bob II.  Tyler fished with Spro bucktails and cut bait and jigged for his flounder at A-Buoy with Capt. Roger Meekins. 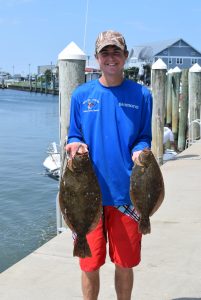 Capt. Chris Adams of the Judy V. had a day off and still decided fishing was the best way to spend his time.  He fished on the Capt. Bob II with Capt. Roger Meekins and caught his limit of flounder, with the largest weighing 4.2lbs and measure 22″ while fishing at Site 10 using Gulp bait.

Have a great holiday weekend. Til next time Tight Lines and Good Times!