Wow…this is a beautiful day today, Saturday, September 9, 2017.  Say a prayer for those folks down in Florida getting ready to be hit by Irma.  Hope everyone can get out of harms way.

Up here, the weather is much better.  There is a good breeze going today, but it is not keeping the real fishermen from heading out and landing a fish.  Check out these reports from this week. 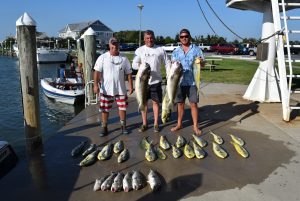 Jim Bunting of Georgetown, DE, Capt. Frank Perna of Alexandria, VA and Tony Balestrieri, fished on the Indian Giver out at the Baltimore and the Poor Man’s and had a pretty good day. They trolled ballyhoo and caught mahi and then deep dropped to catch some nice blue line tile. 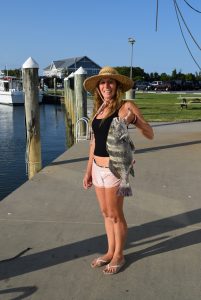 This 6.7lb black drum was caught by Susan Krepshaw of Wilm., DE, using live sand fleas while on the south side of the Indian River Inlet. 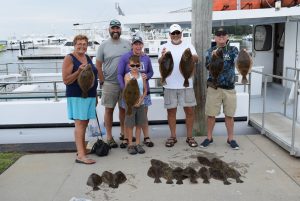 Capt. Roger Meekins took a half day trip on the Capt. Bob II and had a great day of flounder fishing. The boat had 28 keeper flounder with many limits being taken home.  Chris, John, Rowan and Karie Pickell, from Lancaster, PA, Darrell Doupnik of Dagsboro, DE and Tom Carlson of Baltimore, MD. They were fishing out at O-Buoy using cut bait, shiners and Gulp baits.

When folks did have a chance between storms to get out and fish, they landed some nice ones.  Check out the pics and reports below.

Don’t forget to stop by the Fisherman’s Flea Market on Saturday, Sept 9, 2017, from 9am to 3pm.  Our slipholders will have fishing gear and boat related items for sale. 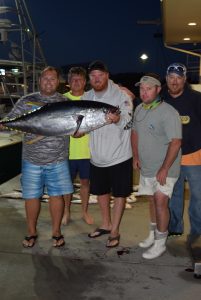 Engine problems on the 3 Amigos didn’t stop their charter from going out this day, when fellow charter boat Last $, run by Capt. Rodney Meyers helped them out.  They fished out at the Baltimore Canyon and brought back this 68.3lb yellow fin tuna.  Picture are Angler Corey Evans of Bethany Beach, DE, Capt. Rodney Meyers of Ocean View, DE, Chris Birney of Wilmington, DE, Richard Harrel of Millsboro, DE and Kevin Dennison of Bethany Beach, DE. 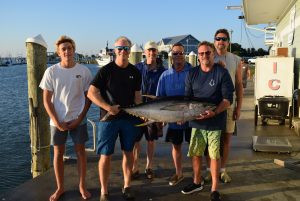 The crew on the Sea Lazer fished out on the west wall of the Baltimore Canyon and brought back this 67.5 yellow fin. Pictured are mate Wes Hobbs of Long Neck, DE, Capt. Mike Fitzgerald of Annapolis, MD, Steven and Billy Doyle of Huntingtown, MD, angler Ken Doody of Fenwick, DE and Steve Geis of West Fenwick, DE. 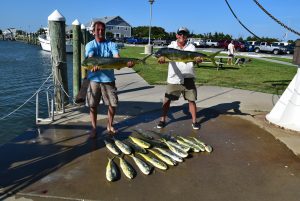 Sam Sloan and Barry Chisnell of Millsboro, DE caught these 20 mahi along with 3 white releases while trolling and chunking out at the Wilmington Canyon on the “Reel Wife”.

Nothing to report except for lots of RAIN!!!   Everyone must be at the Outlets…because they are not out fishing.  College football is about the only thing happening today…which you can come down to Hammerheads Dockside and watch on one of their many TVs.  If you feel like staying home, stop on down to Hookem & Cookem for some fresh seafood to take home and steam up or broil.  Hopefully nicer weather on Sunday allows the ocean to flatten out for a great day of fishing on Monday…Monday is looking like the nicest day of this weekend.

Not much to report.  Small blues in the inlet accompanied by LOTS OF WIND AND RAIN.   The holiday weekend doesn’t look the greatest, but maybe the seas will calm down enough for folks to get out Sun afternoon or Monday.

With the windy and rainy weather the last few days, we have not had any reports of any catches.  The ocean looked flat this morning, so we expect folks to get out there and land some fish.

Indian River Marina is having a Fisherman’s Flea Market on Saturday, September 9, 2017, at 9am.  Slipholders at IRM will have fishing items for sale.  The general public is welcome to come and shop for these items.   Only IRM slipholders are permit to have items for sale.

Since we have not had any reports for fish landed, here are a few pic from this summer: 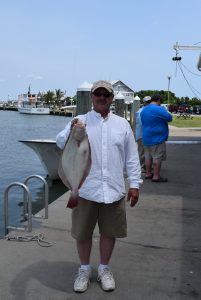 This 4.6lb flounder was caught by Al Fish, from Oil City, PA (yes that’s right) while fishing on the Gale Force Charters with Capt. Aarron Hurd.  They fished in the Indian River Inlet with top and bottom rigs with minnow. 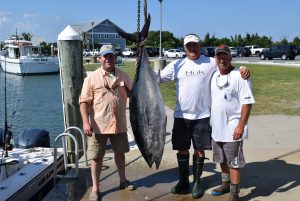 This 126lb blue fin was caught by Frank Perna of Alexandria, VA while trolling ballyhoo on a spreader bar at the Hot Dog. Jim Bunting of Georgetown, DE and Tom Schamno of Baltimore, MD fished with Frank on the Indian Giver.

The forecast does not look good for inshore or offshore fishing the next several days with wind and rain forecasted.  Sooooo, drifting for flounder in the bay in the answer.  Here are some recent pics of flounder catches: 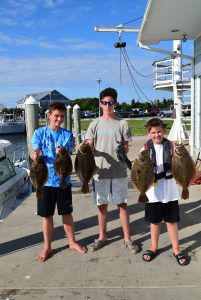 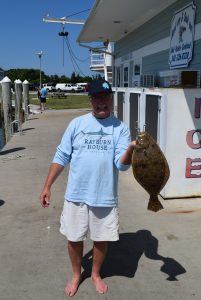 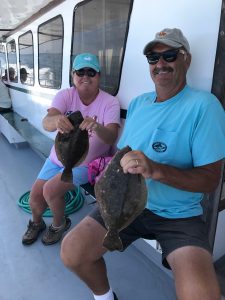 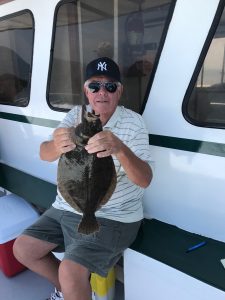 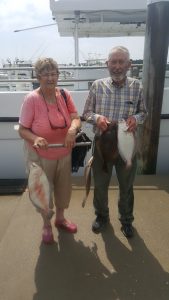 Hang on to your hats.  The wind has kicked up and looks to blow for awhile.  The storms in Texas and Florida right now are keeping many of us glued to the weather stations.  Folks heading out today are reporting good flounder catches, but only a few keepers in the mix.  One fisherman out of Indian River Marina caught a potential state record tile fish.  See pic and info below: 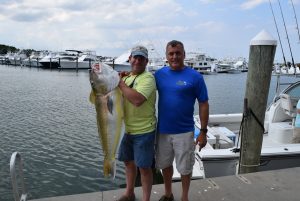 Tom Schanno of Halethorpe, MD caught this amazing Golden Tile fish while fishing at the Baltimore Canyon in 500 feet of water using a butterfly jig.  This beautiful fish weighed 46.5lbs, measured 47 inches in length and had a 29 inch girth. Tom was fishing with Capt. Tom Perna of Alexandria, VA, on the Indian Giver out of Indian River Marina.  It is pending DNREC’s certification, but looks like it will be the new state record for Delaware. 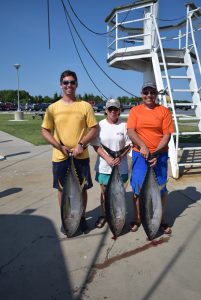 The Ocean Drifter crew, Christian, Carmen and John Ostrowski of Chadds Ford, PA had a great day of fishing out a Massey’s Canyon. They reported chunking with butterfish was slow that day but it turned out to be a good day for them with a 50.4lb and two at 45lbs.

We are on the final day of the 2017 Flounder Pounder Tournament out of Paradise Grill and most of the anglers are out fishing today.  Final weigh-ins are at 6pm tonight, so good luck to everyone fishing today!

We are still seeing a variety of fish caught…and a big flounder every so often! 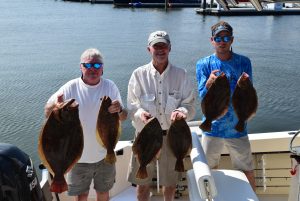 Allen Baker, Jerry Shockley and Zach Morris fish out at B-Buoy and caught a total of 6 keeper flounder. The largest weighed 4lbs and measured 28 inches while the rest of the fish weighed 2-3lbs. 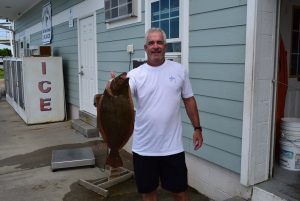 Tom Healy of Fairfax, VA, was using Gulp bait on a jig head and caught this 5lb flounder while fishing south of B-buoy. 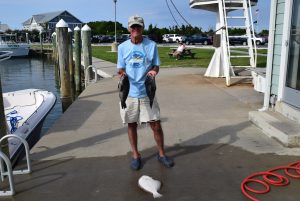 Mike Matsko of Ocean View, DE took his first trip to the Del-Jersey and came back with 2 keeper sea bass weighing in at 2.2lbs each and a 3.5lb flounder.  All were caught jigging with squid. 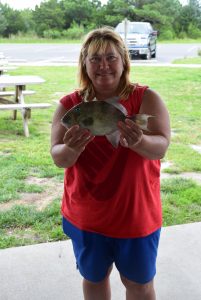 This 1.3lb triggerfish was caught by Denise Shuman of Millertown, PA while fishing in the Indian River Inlet along the jetty. She caught it using sand fleas.

Rain and Wind is back…but not for long.  The weekend forecast looks much better than Friday.  Not many boats fished the Flounder Ponder today, so that leaves two big days of fishing.  Good luck to all anglers participating.  Lets hope all three hundred boats don’t end up at Site 11 all at once! 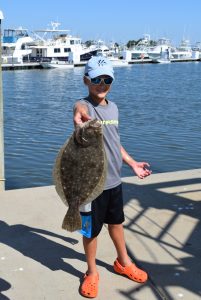 Buddy Dykes of Baltimore, MD caught this 4lb and 22 inch flounder while fishing in the Indian River Inlet using white Gulp on a jig.

The skies are clearing and the boats are out there fishing.  We have full lot at the ramp today, so folks are out fishing.  The forecast looks good for some flounder fishing this weekend.  With over $100,000 in prizes, the Flounder Pounder tournament should have a great turnout with hundreds of boats participating.

Here are some pics and reports from some recent catches: 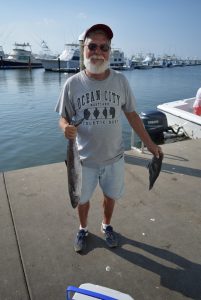 George Kovalich of Millville, DE, holds this 4lb king mackerel that his wife Christine Conover caught while they were on the afternoon trip on the Judy V. with Capt. Chris Adams. Christine worked so hard to catch the fish she had to take a break over at the bar at Hammerheads. 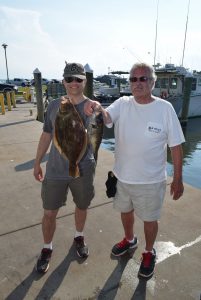 Father, son team Erik Llufrio of Fredericksburg, VA and Paul Llufrio of Middle River, MD caught these keeper fish while on the head boat Judy V.  with Capt. Chris Adams. They were fishing around on the Old Grounds and hooked up with this 2lb flounder and 13 inch black sea bass while using squid. 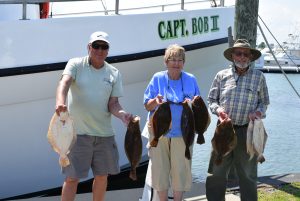 The full day trip on the Capt. Bob II was a good day finally for flounder fishing. Tony Kuypers of Denville, NJ and Connie and Sam Groff of Peach Bottom, PA caught flounder weighing up to 3.5lbs at the Old Grounds.  Some were using pink fluke killers and some were using cut bait. 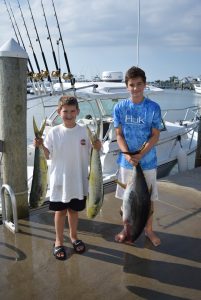 Justin and Jacob McGuire of Middletown, DE fished out at Massey’s on the Makin’ Time and caught this 8.8lb mahi and 47lb yellow fin tuna. They were trolling with ballyhoo.