The fishing action has been hot here at Indian River Marina.  Apparently the great spring weather not only brought out the crowds, but also the fish!

On IRM’s own Gale Force Charters, Brian Smith of Dallastown, PA, Michael O’Neill of York, PA and Jack Schenck of Dover, DE went fishing with Capt. Aaron Hurd and caught these nice stripers.  They weighed in at 19.8lbs and 12.4lbs and were caught using bucktails. 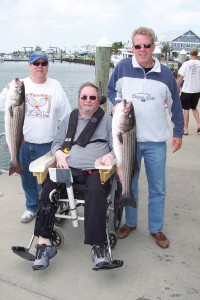 Josh Tryon of Lewes, DE, caught an 11lb rock fish and a 4.1lb weak fish while fishing with swim shads in the Indian River Inlet. 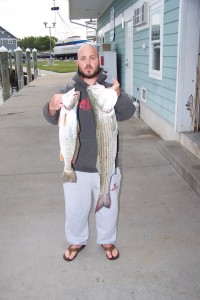 Tim, Breeze, Steve and Carl Parrill and Keith Carter, all of Bethany Beach, DE, went out fishing with Capt Phil Goote on the “Fish Magnet”out of Hooper’s Island and had their limit of trophy rock fish in 2 hours while they were trolling planer boards. 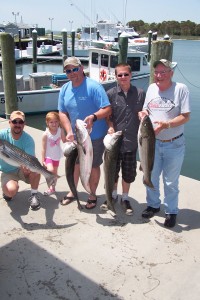 John Carr of North East, MD, Capt. Kenny Gray of Rehoboth, DE, Don and angler Joseph Foley of Warwick, MD and Brian Gray of Selinsgrove, PA caught the first thresher shark of the season just inside of B-buoy. This shark weighed in at 268.8lbs and was caught using whole mackerel on “Just Right 5” 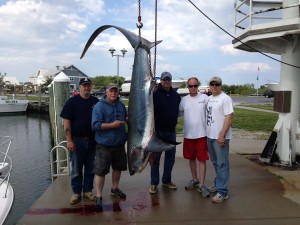 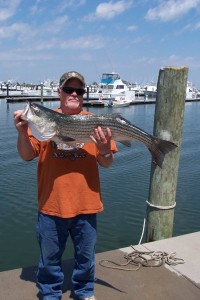 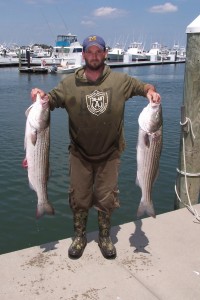 George Celia of Douglasville, PA, caught this 13.6lb black drum while trying to fish for flounder with a plain hook and a chartreuse swimming mullet Gulp bait.  He was fishing in front of the Coast Guard station in the Indian River Inlet. 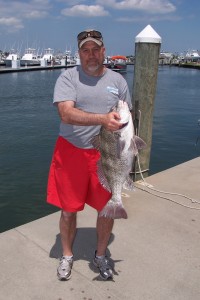 All photos are courtesy of Hook ’em & Cook ’em

This weekend be sure to stop by the Indian River Marina.  On Saturday and Sunday Hook ’em & Cook ’em will be holding a Memorial Day Weekend sidewalk sale.  There will be plenty of awesome deals to start your fishing season off right!

Hammerheads Dockside is now open 7 days per week and starting after Memorial Day weekend there will be live entertainment every night.

Be sure to check back soon and tight lines and good times!