This weekend was capped off with great fishing here at Indian River Marina. Inshore reports are still holding steady with boats bringing in Triggerfish, Croaker, Bluefish, Seabass and limits of Flounder.  Offshore reports Mahi, Wahoo, scattered Bigeye and Yellowfin Tuna. Blue and White Marlin releases have increased which is great as we get closer to the White Marlin Open.

Come on down and catch yourself some dinner while watching the fish being weighed in at the scales! Or give us a call and book your charter today at 302-227-3071!

All photos courtesy of Hook’em and Cook’em. 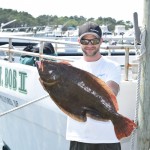 On Saturday the Capt. Bob II had a full day Flounder jigging trip.

Shimano provided rods and reels for customers to try out and fish with on this trip. The boat had a great day of fishing with 80 keeper Flounder making it back to dock. Shimano rep. Patrick Latham is holding the pool fish winner was this 8.6lbs Flounder that was caught by John Yoder of Dover, DE. It was caught on a nuclear chicken Gulp bait. 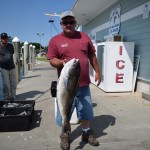 Merv Reiff of New Holland, PA caught this 18.7lb blue line tile fish while on the Capt. Ike II with Capt. Dave Collins. He caught this and other blue lines fishing in the Baltimore Canyon using whole squid. 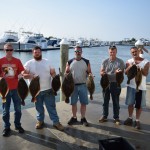 Wayne (4.8lb) and Dave Wise, Jeremy Lloyd (6.4lb), Dave Wise, Sr. and Ken Wise all from Kimberton, PA caught these keeper Flounder while fishing on the Judy V’s afternoon trip. Capt. Eddie Wheedleton reported that there were a total of 37 keeper Flounder that were caught fishing at the Old Grounds using cut bait and jigging on the bottom. 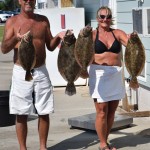 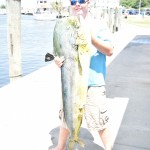 This 37 lbs and 48.5 ” mahi was caught by Brad Cave of Dagsboro, DE while trolling ballyhoo at the Baltimore Canyon.

What a beautiful weekend here at IRM….  The weather made for another succussful Seafood & Arts Festival and plenty of good fishing.  Inshore reports range from incredible Flounder fishing, triggerfish, Seabass, croaker and some coastal sharks.  Offshore reporting a bit of a slow down in the Tuna fishing, still some scattered Bigeyes and Yellowfins and plenty of skippies.  Some nice Wahoo and Gaffer Mahi have been landed as well.  White and Blue Marlin releases seem to be steadily increasing which is good news for the White Marlin Tournament coming up soon.

The Capt. Bob II had a full day fishing trip on Sunday out at the Old Grounds using cut bait and squid. They limited out on flounder with the fish ranging in weight from 2lbs-5lbs with everyone taking home their limit. Pictured are Connie and Sam Groff of , Lawrene Nixon Anfinson (celebrating her 72nd birthday) her grandsons Brennan Ralls and Ruslan Nellis, Mike Zita, Capt. Roger Meekins, Super Mate Chris Adams and Ed Maull. 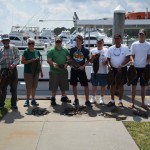 Charlie Horning and his crew aboard the Fish Whistle had a great overnighter landing these Big Eyes.  Nice job guys!!! 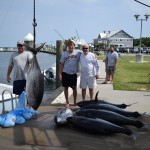 The Gessler Family from the Boy’s Toy along with George Merrick, and Jimmy Taylor caught these 3 big eye fishing Wilmington Canyon. They were trolling ballyhoo in the evening to night. The fish weighed in at 120-180lbs. 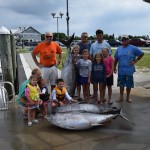 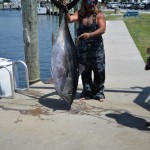 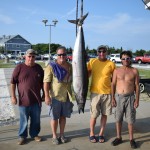 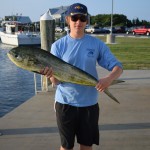 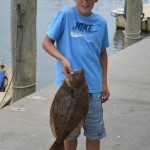 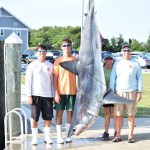 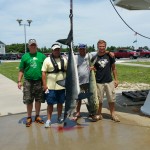 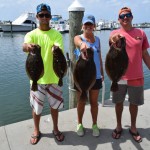 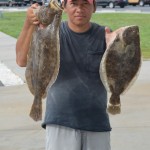 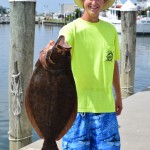 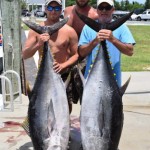 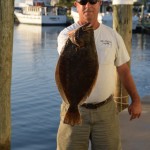 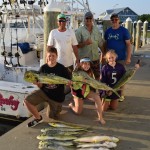 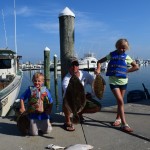 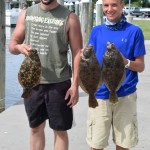 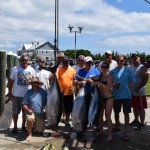 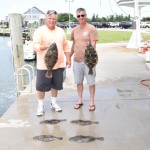 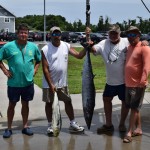 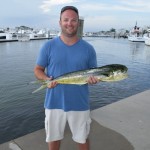 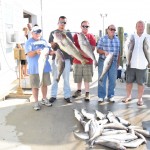 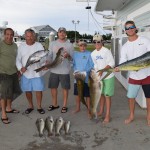