Ray Suchak of West Springfield, MA, caught this 2.7lb and 18 inch flounder while fishing on the head boat Judy V. with Capt. Eddie Wheedleton. They were fishing with cut bait out at B-Buoy. 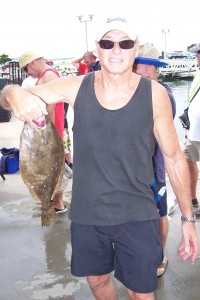 Jamin Heck and Laughlin Bitler of Reading, PA, caught 3.5lb flounder along with a blue fish while on the head boat Judy V. with Capt. Eddie Wheedleton. the 20″ flounder was caught using cut bait on a fluke killer. 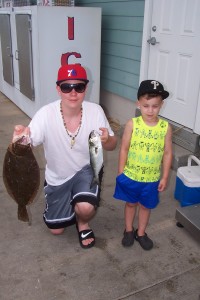 Joe Sileo of Delran, NJ, caught these 4.3lb 23 inch and 2.5lb 17 inch flounder while fishing with Capt. Eddie Wheedleton on the head boat Judy V. at B-Buoy with cut bait. 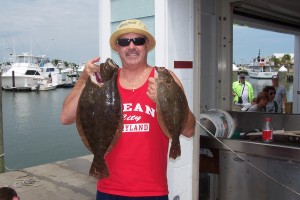 Kenny and David Hopkins of Wilmington, DE, caught these keeper flounder while fishing out at A-Buoy using squid and minnows. The largest fish caught by David weighed 4.1lbs and was caught on “Rock On”

While trolling ballyhoo in the Baltimore Canyon on an overnight trip Capt. Charlie Horning of the “Fish Whistle” hooked up on a 143lb big eye tuna along with 2 white marlin releases and 2 mahi. John Horning, Stephen Schwing ,Anthony Casselli and Trent McMahon (not pictured) are all from the Maryland area. 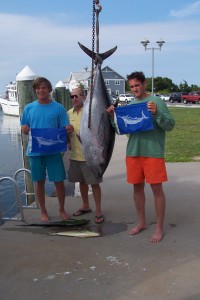 While fishing on “Hear no Evil” Richard Harkins and Dan Kinsey were fishing at Massey’s Canyon and the Chicken Bone and caught these 2 mahi. One was caught on the chunk and the other on the troll. The largest weighed in at 18.1lbs. 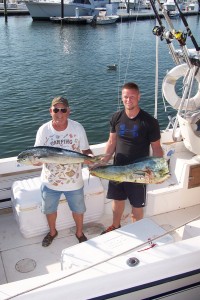 We have had a very busy, and fun Labor Day weekend.  It seems like summer just started, but luckily there is still a lot of great fishing ahead of us.  With all of the hectic summer schedules winding down now is a great time to book a charter out of Indian River Marina.  Please call the marina office at 302-227-3071 and we will be happy to assist you in scheduling a great charter experience.

Great weather and fishing this week.  As soon as the latest Hurricane passes Offshore the boats will venture out again.  Here are some of the latest reports and pics.

Capt. Roger Meekins of the Capt. Bob II went fishing with Jeff Waxman and Chuck Taylor of Bethany Beach on “After You” and caught their limit of flounder using 6″ Gulp on jig heads out at B-Buoy. 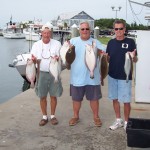 Capt. Dave Collins of the “Capt. Ike II” took John and Kyle Lytwyhec of Newark, DE and Matt DeNarie of Phila, PA fishing out to the Hot Dog and caught these four mahi. The largest weighed in at 21.6lbs. 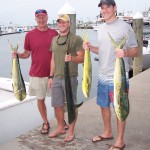 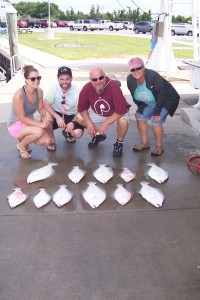 What a great summer we have been having at Indian River Marina.  The fishing continues to be hot both Inshore and Offshore.

Inshore Flounder fishing is the best we have seen on over 20 years.  There have been reports of anglers with grand totals for the season with over 80 keeper Flounder!!  That is incredible and the Flounder are everywhere! in the Bay, Inlet and Inshore Reports of many small Rockfish in the Inlet over the past week continues.

Offshore reporting many White and Blue Marlin landed in the latest local Tournament with hundreds of White Marlin Releases.  Peanut to Gaffer Mahi being landed in the weed lines and balls from the Poorman’s to the Baltimore Canyon’s.  The Tuna bite has been hot and cold from the Wilmington to the Washington.

With plenty of good fishing and nice weather to come give us a call and book your next Charter with the Indian River Marina Charter Fleet at 302-227-3071.

Till next week tight lines and good times

Frank, Eileen and Nikki Adler and Peter Morris all from Phila., PA, caught 31lbs of flounder with the biggest weighing in at 4.6lbs with squid out at Site 10 on “Gale Force” with Capt. Aaron Hurd.

Tom Schulz of Alexandria, VA, caught this 3.4lb and 23 inch flounder while fishing on the Judy V. with Capt. Eddie Wheedleton out at B-Buoy.

He was using cut bait on a fluke killer.

Teyona Danner of Mechanicsburg, PA caught these 6.6lb and 8lb mahi at the Hot Dog. 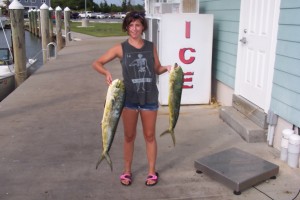 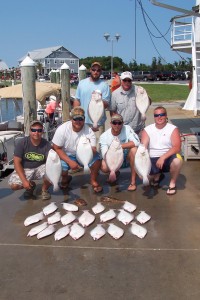 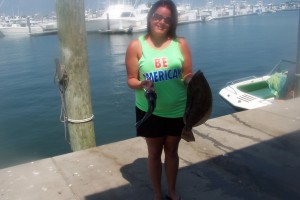 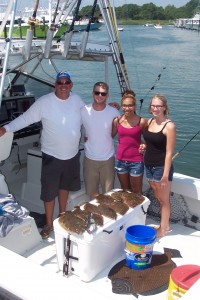 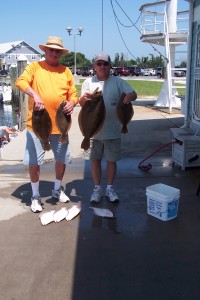 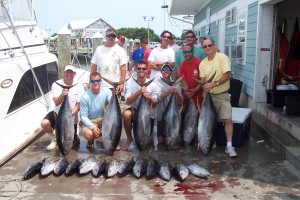 Our first swordfish of the season was brought in on August 9th. This 62.8lb sword was caught by Cy Brong of Wilmington, DE on “Last $” with Capt. Rodney Meyers, Larry Chenney and Gregg Peters of Ocean View, DE.  The crew also brought in 30 mahi.

The “Tressa Lynn” Captained by Gerry Bulat of Indian River, DE, took his friends out to the Wilmington Canyon and brought back a 86lb wahoo caught by Vincent Kerrigan of Wilm., DE and a 102lb big eye tuna caught by Craig Pawley of Bernville, PA. They also had a 250lb blue marlin release. 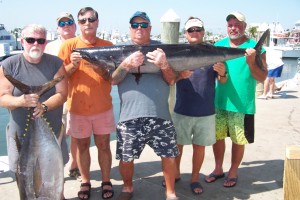 We have been seeing some pretty good flounder action here lately.  While a good number of flatties have been coming up short we are still seeing some nice fish come in.  We are looking forward to another busy weekend here so be sure to stop by to see all of the action.

Sean Leiby of Philadelphia, PA caught a 6.3lb and 4.4lb flounder out at the Old Grounds while fishing on “Horizon”. He was using squid and minnows to land these nice flatties. 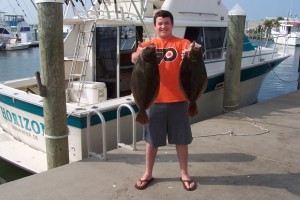 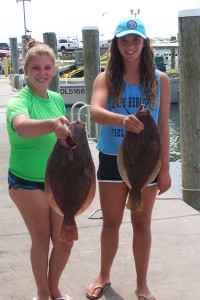 Kenny Arndt of Reading, PA, Chad Tingle of Selbyville, DE and Heath Berger of Reading PA caught 9 keeper flounder on squid and minnows out at Site 10. Heath had the biggest flounder weighing in at 6.2lbs. They also had some black sea bass and croaker. 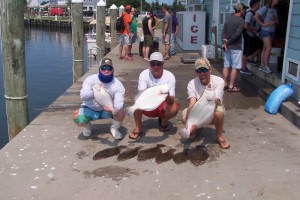 All photos are courtesy for Hook ’em & Cook ’em.

Eric and Mark fished with Indian River Marina’s Capt Aaron Hurd on Gale Force on Sun Aug 10 in the ocean for a half day trip. They started with trolling up a limit of 20 bluefish and finished with catching 7 keeper flounder and 2 keeper sea bass.  Nice catches!  Until next time, tight lines and good times! 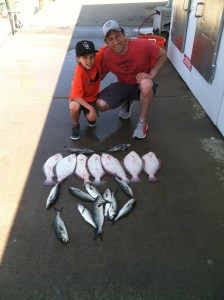 It is slamming here at Indian River Marina this weekend.  Saturday saw record crowds at the marina and today is shaping up to be the same.  The docks, fuel dock, boat ramp, and Hammerheads were all jam packed.  Once all of the reports are in from the docks we will share the pictures and write-ups.

On Saturday, Gale Force Charters based at IRM had catches of 24 flounder in the ocean at the shipping lane.  Great job to all! 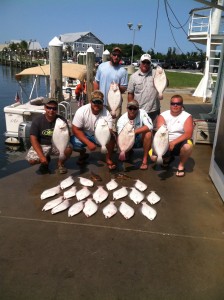 The weekend is almost here and we are looking forward to some great fishing and great weather!  Here are a few more reports from earlier in the week here at Indian River Marina.

Mike and Anika Zima of Chicago, IL fished on the Judy V. with Capt. Ed Wheedleton and caught this 2lb black sea bass on clam and a 2lb flounder on shiners.   The fish were caught drifting at Site 10. 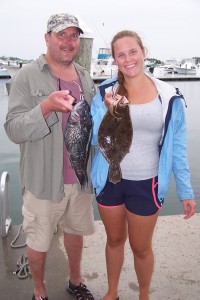 Kathy Herring of Silver Spring, MD, Oliva Zanjani and Shawn Cousan of Springfield, VA caught these croaker while fishing on the Judy V. with Capt. Ed Wheedleton while fishing at the 3 mile line off of Indian River. 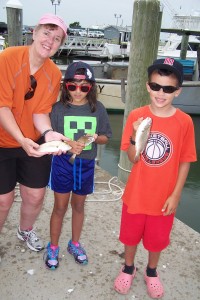 Kathy Romine and Brett and Toni Foltz all of Harrisburg, PA caught a 16′ flounder, a 12 1/2″ black sea bass and a bag full of croaker while fishing on the Capt. Bob II with Capt. Roger Meekins. 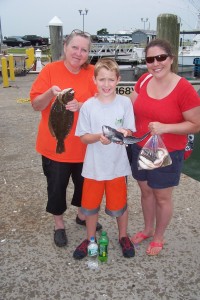 The Capt. Ike II from Indian River Marina had a great overnight trip on Thursday into Friday morning when they came back to the dock with 20 yellow fin tuna.  Stephen Showalter, Carl Sensenig, Harvey Good, Eric Weaver and Lee Sinsenig all of Port Trevorton, PA filled all their coolers with bags of meat from the 765lbs of tuna caught out at the Washington Canyon. Capt.  Dave Collins reported that they trolled and caught most of these fish between 6pm-9pm on Thursday night with over 15 throw backs. 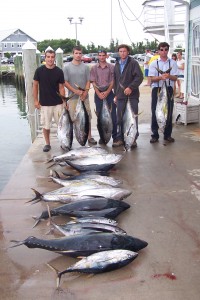 The 41st White Marlin Open is now underway and we wish all anglers and boats tight lines, but espeically all of the Indian River Marina boats in the tournament.  We are looking forward to hearing about all the great catches and releases as the week goes on.

The past week has seen some great fishing here at IRM.

Rob Sinko of Middletown, DE, Katie Marchiani of Wilm., DE and Will Shahan of Middletown, DE were fishing on 3R’s beach on Saturday afternoon and had a great day of fishing. They caught bluefish, croaker and kingfish all day using chunked spot and bloodworms. 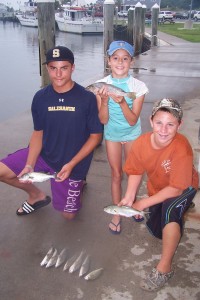 Dillon Baker of Millville, DE was diving on the Arthur T. Hall off of Ocean City, MD in 90′ of water and shot this 18.4lb tog right between the eyes. 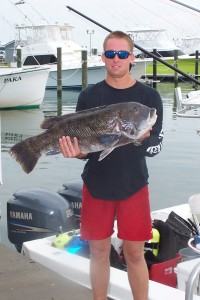 Abby, Jim and Ella Forrester of Baltimore, MD fished on the Judy V. with Capt. Ed Wheedleton and caught these two keeper black sea bass using shiners out at Site 10. 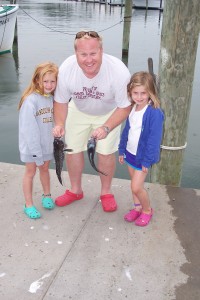